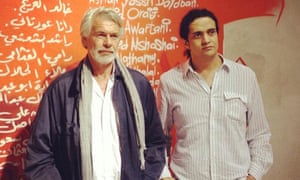 Ashraf Fayadh, a Palestinian poet and leading member of Saudi Arabia’s nascent contemporary art scene is being sentenced to death for renouncing Islam. On Tuesday, the Saudi court ordered the 35 year olds execution. Fayadh was originally sentenced to four years in prison and 800 lashes by the general court in Abha, but he was re-tried last month and the new panel of judges ruled that his repentance will not prevent his execution. Fayadh was not even assigned a lawyer because his ID was confiscated when he was arrested in January 2014. In Colombia, Alzheimer’s is called “La bobera”, meaning, “the foolishness”. To 47 year old Pedro Julio in 1984, also known as Patient No.1, Alzheimer’s robbed him of his ability to farm. Dr.Francisco Lopero was the physician on staff that day in 1984, and it puzzled him to see such an early-onset of Alzheimer’s. Intrigued by the surprisingly high amount of patients with early-onset Alzheimer’s, Lopera travelled through the countryside to interview families. For centuries, villagers thought it was because of a curse. Lopera has discovered that the sickness stems from a rare mutation on chromosome 14. Carriers of the paisa mutation are guaranteed to develop the disease, usually in their 40s. The clan’s bloodline is currently being studied, in hopes of raising possibilities for developing a cure.

Hunt for suspects of terror attack in Bamako, Mali.

Evidence of Gun Conflict in the Hotel (Image Courtesy of BBC)

On 21 November, 2015, Mali woke up to a state of emergency. This was due to a supposed terrorist attack on a hotel in the capital, Bamako. As a result, the 10-day state of emergency begun, in addition to the 3 days of national mourning for the 19 whom were killed. However, it appears that the attack did not rattle the population significantly, as for the past 3 years the country has been on alert to Jihadi threats. Though the attack was rather severe, the president has stated that the country will still not be a closed border zone, like other countries that have experienced recent terror attacks.

Canadian resident returns to Ghana tribe as a King.

Eric Manu has been living in Vancouver, B.C. for the past 3 years. However, he has recently been crowned the king of the 6,000-person Akan tribe in Ghana, as successor to his uncle.

Erica Manu (to the left) and Susan Watson (on the right). (Photo courtesy of Nick Procaylo)

With his boss Susan Watson, Manu hopes to launch an international charity foundation called to give donations to the people of Ghana, along with training in the agricultural. This would aid many civilians in developing countries in learning how to generate profit through agricultural produce. He hopes such an effort may reduce their struggles.

Susan Watson was inspired to aid Manu’s tribe after he invited her for the ceremony. Afterwards, she decided to learn more about Ghanaian culture, resulting in the creation of the non-profit organization. The coronation is taking place in January 2016, and Watson will attend along with performing charitable works.

On a bomb from Russia to Syria is written “For Paris”. (Image courtesy of Reuters 3rd Party)

After Syrian militants claimed responsibility for over 300 lives in the recent Paris attack and destruction of a boarded airliner, Russia decided to increase their offence against Syria. One of the nation’s crewmembers wrote “For Paris” on a multitude of bombs, as a symbol of their support for the terrorized city. In addition, this was also seen as a sign towards the strengthening an alliance between the Kremlin and the West.

Russell Ijaya is a photographer and print developer at the Reckoner. He loves well-designed things, captivating visuals, and indulging in the art form known as “photography”. Whether it’s in the bustling city or the quietest of lookout points, you’ll often hear a camera shutter trailing right behind him. Otherwise, you’ll probably see him in an uncomfortable position looming over his laptop, either editing his shots or scrambling for the assignment due in an hour. But that doesn’t mean he’s not approachable - though more of an introvert, he loves a good DSC03784.jpgconversation. With coffee, but food works too.