Recently, the forefront of nearly every headline has been the events that have unfolded in Palestine and Israel, leaving some with a multitude of questions and inciting outcry from others. But while the situation has only recently escalated and garnered worldwide attention, its origins go back decades. 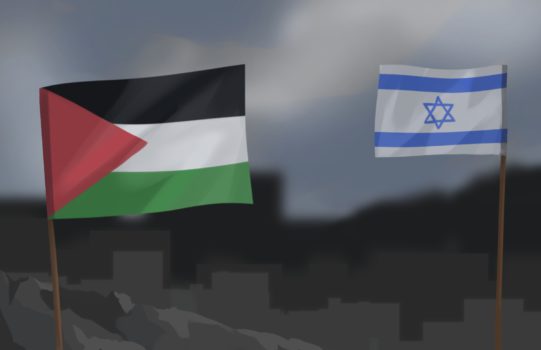 Flags of Palestine and Israel

Tensions began to rise when six Palestinian families living in the Sheikh Jarrah neighbourhood in the occupied West Bank were at risk of forcible eviction from their homes to allow for Israeli settlers to take their place in a decision made by the Supreme Court of Israel. Such annexations had already been carried out in the neighbourhood previously in 2009 and 2011; for many, it was not their first time having to relocate.

This sparked an outcry among Palestinians in the West Bank and Israel, who began to protest against the forced displacement of the families in Sheikh Jarrah, who had been living in their homes for decades, on 6 May 2021. The Israeli Defense Forces were then dispatched to disperse protesters with skunk water, a chemically manipulated form of sewage water. Violent clashes occurred between the Arab and Jewish populations in Israeli cities, and at least twelve Palestinians were killed in the West Bank since the eruption of the protests.

Oren Ziv, a journalist in Tel Aviv commented on the nature of the protests sparked by the looming evictions. “They [Palestinians] see it [protests] as an uprising against the institutional discrimination and racism towards the Arab population in Israel. We’re talking about house demolition, discrimination in education, and lack of facilities, while right-wing settler groups are moving into the cities not just to live there but to make those places more Jewish, to push out Arab residents and take over those neighbourhoods.”

On May 10, the Israeli police fired rubber bullets, stun grenades, and tear gas at worshippers in the compound of Al-Aqsa mosque in Jerusalem, Islam’s third holiest site, during the month of Ramadan. Over 300 Palestinians were injured.

In response to the attacks, Hamas, Palestine’s only military organization, demanded that Israel withdraw occupation forces from Al Aqsa and Sheikh Jarrah. When Israel failed to do so about 140 rockets were fired from Gaza, many of which were intercepted by Israel’s military defence system. No casualties were reported.

Regarding the rocket fire, Israeli Prime Minister Benjamin Netanyahu said, “Israel will respond very forcefully. We will not tolerate attacks on our territory, our capital, our citizens and our soldiers. Whoever strikes us will pay a heavy price.”

And indeed, a heavy price was paid as the Gaza strip was bombarded with airstrikes for eleven days, from 9 May to 20 May 2021.

While some countries such as the US, Canada, Germany, and France believed that Israel was acting in self-defense and that attacks from Hamas were intolerable, Iran and Turkey spoke up in support of Palestine. Most countries and world leaders had chosen to stay silent or describe the situation as violence that both sides were causing.

The US, a close ally of Israel, blocked any statements from the UN three times in a week while the violence was occurring even though all other permanent security council members were in agreement.

As concern from the international community grew as the death toll rose, a ceasefire was announced between Israel and Hamas on 21 May with at least 248 Palestinians dead, including 66 children, as well as 1900 wounded and 58 000 displaced by the destruction. Buildings damaged or destroyed included a media tower that housed Al Jazeera and the Associated Press, schools, hospitals, about 17 000 residential units, and Gaza’s only COVID-19 testing laboratory. Israel reported twelve casualties during the entire span of the escalation.

While the situation is now being referred to as ‘the worst Mideast violence since 2014,’ its origins go back decades, to when Israel was established as a state.

Following the Second World War, hundreds of thousands of European Jews were displaced due to the Holocaust. A rise in anti-semitism in Europe had convinced them they needed their own country, so they decided to settle in their ancestral homeland in what was British-controlled Palestine at the time.

However, Arab Palestinians had already been living there for hundreds of years, and tensions began to rise as more and more Jewish settlers arrived and Palestinians were forced to give up their homes to make space for them. The conflict caused the UN to propose splitting the land into 2 countries, promising 56% of Palestine for an Israeli state. However, by the end of the war Israel had control over about 77% of the land, everything except the West Bank including the Eastern quarter of Jerusalem and the Gaza strip, leaving Palestinians completely without a state.

Israel was declared a state on May 15, 1948, a date Palestinians refer to as “nakba” or “catastrophe” in Arabic as countless families were forced out of their homes. About 530 Palestinian neighbourhoods were uprooted and about 700 000 people became refugees.

Since then Israeli occupation forces have also taken control over the West Bank, now referred to as the occupied West Bank, where many families have also been displaced to make way for Israeli settlers. It also has complete control over the Gaza strip in the form of a land, air, and sea blockade, which is known as an ‘open air prison.’

One of the most densely populated areas on the planet, the Gaza strip is home to about two million people, with over half of them being children. According to the UN, 38% of Gazans live in poverty, and about 26% of the workforce is unemployed. Living conditions are poor, with households receiving eight hours of electricity per day on a rotating basis, and now only three to four hours per day after the recent bombings damaged power lines. Water shortages are also widespread, with families receiving water for 6-8 hours every four days in 2017. This has been further reduced by the recent destruction.

Many have been sharing their experiences on social media, such as journalists Muhammad and Muna El-Kurd who have already lost half of their home in Sheikh Jarrah to Israeli settlers and are at risk of losing the rest as well. Families in Gaza also shared heart-wrenching stories during the bombings, such as a tweet from Eman Basher:

“Tonight, I put the kids to sleep in our bedroom. So that when we die, we die together and no one would live to mourn the loss of one another.”

The internet has played a significant role in bringing attention to the situation through these stories. Social media creators such as Subhi Taha, who has 750 thousand followers on instagram and 344 thousand followers on TikTok, have been creating posts and videos explaining the situation and encouraging people to raise awareness about it. As a result, accounts with followings from the hundreds to the many thousands have been posting with hashtags such as #SaveSheikhJarrah, #GazaUnderAttack, and #FreePalestine.

Celebrities such as Gigi and Bella Hadid, Dua Lipa, The Weeknd, and Halsey have also expressed their support for the Palestinian cause, although they received backlash for it and in some cases have been accused of being anti-semitic.

Gigi Hadid responded to some of these accusations, saying, “I condemn anti-semitism. I am not trying to kill you, nor would I ever want that. I do not wish any more deaths upon Israelis, just as I feel about Palestinians. What I do want is equal rights for Palestinians. There are also Jewish Palestinians and Christian Palestinians, as there was, coexisting, with my father’s Muslim Palestinian family when he was born in Palestine in 1948.”

The wave of social media awareness has sparked action by many all around the world. Even after the ceasefire was announced, protests continued to take place all around the world. People are demanding that their governments condemn the Israeli occupation and stop sending military aid to the state.

In 2019, Canada provided $13.7 million in military goods and technology to Israel and recently signed a $36 million contract to purchase drones from the state. However, after many Canadians expressed their disappointment at his support for Israel, Prime Minister Justin Trudeau committed $25 million in humanitarian aid to Palestinians in Gaza and the West Bank.

With the Palestinian city of Silwan now facing a similar fate to that of Sheikh Jarrah, and Gazans reeling from the death and destruction that took place many are still bringing attention to the conditions of apartheid in Palestine although the bombings have stopped. Many consumers are also boycotting products produced by Israeli companies or by companies that support the state, such as L’oreal, General Mills, and Airbnb.

The hope is to bring attention to the situation and find a more permanent solution. Rather than a temporary ceasefire, one that will put an end to the violence and poor humanitarian conditions that have existed in the region for years.

Urooba Shaikh is a Grade 12 student at MGCI and a writer for the news and editorial boards at The Reckoner. She can usually be found scrambling to finish the homework she should have done earlier. In her spare time she likes to do many things that she is not good at, such as playing sports, singing, painting, and cooking. The three things she loves most in the world are food, books, and sleep, but she usually doesn’t get enough of any of them. She hopes to one day write something that will make the world a better place.