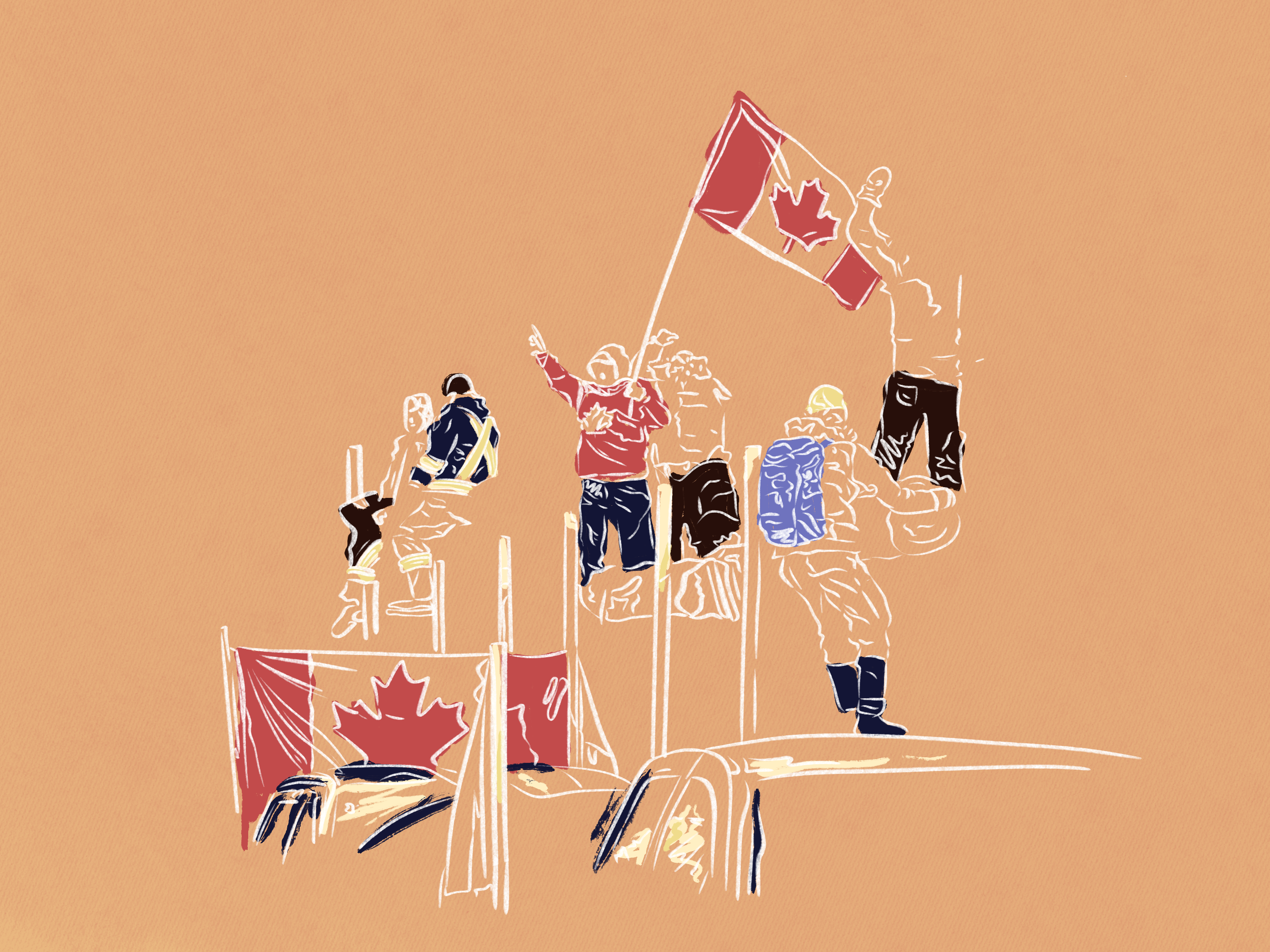 Should sound torture be allowed on entire cities while waving Confederate and Nazi flags? Does a lawful protest starve a city of healthcare, blockade roads and border crossings that fuel the livelihoods of countless, and urinate on the National War Memorial? Should these actions be protected by freedom of expression?

According to the “Freedom Convoy”, a group that occupied Ottawa for over three weeks, the answer to all of these questions is an emphatic yes. They’ve blasted horns day and night, driving people out of their own homes. They’ve waved flags that symbolize fascism and oppression in the streets, and ironically urinated on the memorials that symbolize Canada’s freedom. They have relentlessly harassed residents for just wearing a mask. All of this damage is for, as they have said themselves, the purpose of pressuring the government to lift pandemic safety measures. It’s one thing to demonstrate against unfair policy by occupying space in front of government buildings, but it is a revoltingly selfish action to hold a whole city hostage over protocols that are meant to keep everyone healthy.

That’s right. The protestors’ demands include the lifting of all COVID-19 restrictions and the resignation of Prime Minister Justin Trudeau. They are requesting that the front-line workers everywhere in Canada, people who have been through hell during this pandemic, be put in more danger because the truckers want their happy hour back. They have the audacity to protest against wearing a piece of fabric that saves lives, while there are front-line workers who have had to wear them for 2 years so as to not put their families in danger. Vigilant, responsible citizens who have kept themselves and others safe are watching this attempt to obliterate everything they have worked towards. In a world where ambulances are becoming unavailable during life-threatening emergencies are blocked by truckers, the healthcare system would collapse if the demands of truckers were met.

As a citizen of a democratic country, everyone should have the right to protest, but only peacefully. When citizens protest, they should be beholden to the rules around maintaining peace. If they violate these laws, they effectively forfeit their right to participate in that gathering and should receive an appropriate punishment. If a protester blasts irritating noises at local residents and demands that local charities serve them, then there should be consequences that follow. Public order and the rule of law should never be allowed to falter, especially in a protest. A protestor’s right to demonstrate should not deprive the right of local residents to live in peace. The common Ottawa citizen has nothing to do with issuing or rescinding public health orders. They should not have to suffer for the facilitation of the Freedom Convoy. The government of Canada cannot send the message that people can commit crimes to get what they want and be let off the hook, but that is exactly what it told the Freedom Convoy when it sat on its hands and patiently waited for the protestors to return home.

What adds insult to injury is that the federal government had all the tools it needed to end the occupation of Ottawa, yet chose not to. Instead, they, alongside the Ontario provincial government, asked the occupiers very nicely to leave. On the third day of the occupations, with incessant honking filling the air, then-Chief of Ottawa Police Peter Sloly said, “the demonstration has scaled down over the last 12 hours. We want that trend to continue until this demonstration comes to a complete end. I cannot guarantee you that right now” [1]. The Chief of Police, who was tasked with leading the local peacekeeping force, chose not to intervene, even though the ITAC gave clear forewarning of trouble and a local soup kitchen was harassed by protestors for meals [3][4]. To nobody’s surprise, the occupation continued. Instead, it fell to the citizens of Ottawa, not the government, police, or other institution, to take action with a court injunction against excessive noise that took effect on Day 19 of the occupation [2]. It took the Prime Minister until Day 22 to take decisive action [5].

A responsible government should have seen the threat, taken preemptive action, and better communicated the difference between a lawful and an unlawful assembly. As protests against the government grow in number, it is best for everyone if the people who are given the responsibility of keeping the peace are better prepared for what may happen. The failure of the Trudeau government to recognize this basic axiom of society is simply inexcusable and makes Trudeau Sr.’s Godzilla-threshold handling of the FLQ crisis in Quebec look comparatively active. Demonstrations must remain lawful and peaceful, and anyone who breaks these laws should, in accordance with the law, be deprived of their right to take part.

A member of the editorial board, he cannot bear to type his own name. Likely holds the opinion that the best immortality timeline exists in the "Arc of a Scythe" book series by Neal Shusterman and that luck is made, not had. He can be seen recreationally wearing a tie.

Why We Should Go Back to 45-Minute Periods