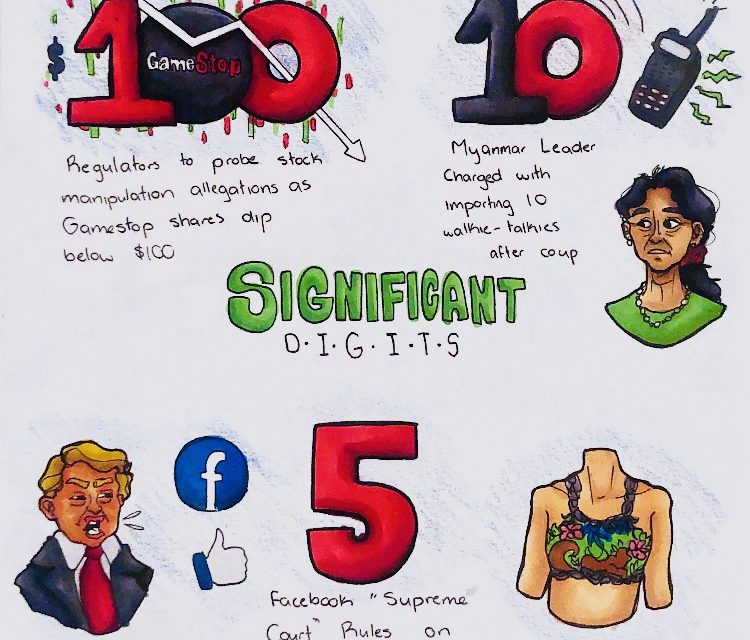 The Canadian Securities Administrators and the Investment Industry Regulatory Organization of Canada released a statement on Monday that they “will take appropriate regulatory action to protect investors” if they identify “abusive or manipulative trading.” They said that they are monitoring the situation. [CBC] [By Emily Ma]

Myanmar’s democratically elected government was overthrown in a military coup on 1 February. State Counsellor Aung San Suu Kyi, President U Win Myint, and other top officials were arrested, as the military announced a one-year state of emergency. On 3 February, Suu Kyi was charged with illegally obtaining walkie-talkies, with a prison sentence of up to three years. Her National League for Democracy party had ruled for only five years, after the peaceful 2015 transfer of power to the civilian government.

On 28 January, the Facebook Oversight Board announced decisions on five cases where Facebook removed user content, ruling for the user in four of them. The Board, created in October 2020, consists of 20 journalists, lawyers, and human rights experts and has the ability to overturn Facebook moderation decisions. Users can appeal to this body if they feel that their posts were unfairly removed. The Oversight Board is currently considering whether or not to overturn Facebook’s suspension of Donald Trump’s account following the 6 January Capitol riot. [NBC] [By KEVIN WANG]

A Haunted Hallowe’en in Garneau’s Halls