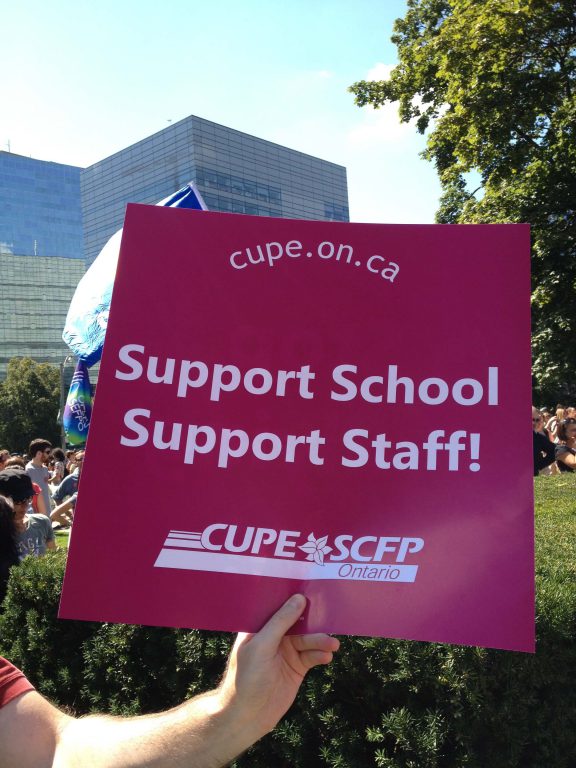 One of the protestor’s posters.

With the school year coming up in just a week, many have heard of the controversy surrounding the proposed “Putting Students First” act. In the face of a $15 billion provincial deficit, the Liberal government has created this bill to save the government $473 million in teacher and support staff salaries over the next two years.

The current collective bargaining agreement (the contract that all teachers are working under) will expire on August 31. If a new agreement is not reached by September 1, negotiations will simply continue while the existing one rolls over. This means that everyone would continue working under the terms of the current contract.

The “Putting Students First” act, on the other hand, bypasses negotiation and imposes a new agreement on all teachers that includes a wage freeze for two years (with salaries increasing for teachers only through seniority), fewer sick days, a removal of the teachers’ right to “bank” their sick days, and three unpaid “professional development” days over the year. 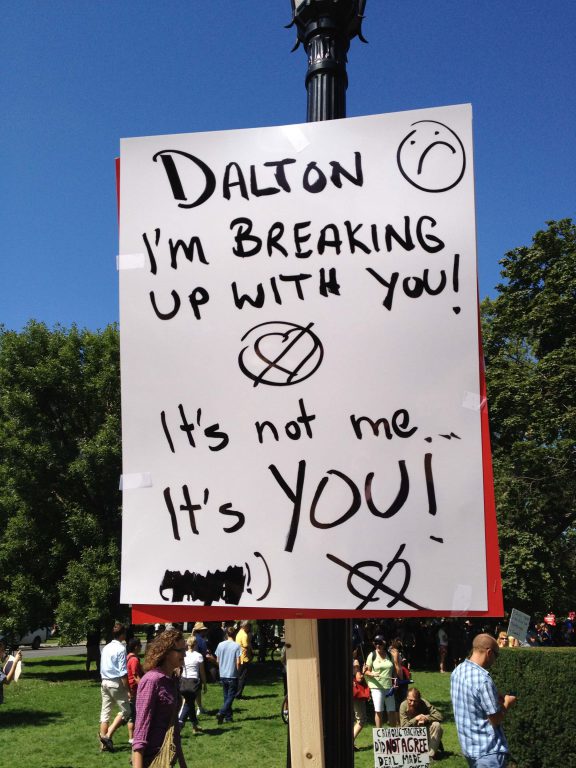 A poster expressing disdain for Dalton McGuinty: one of the driving forces behind the act.

It is under such conditions that the supporters of this bill hope to save $473 million in an effort to battle the debt. The bill would also make a teacher strike illegal for two years, ensuring that schools start on September 4 (although teacher unions have made clear that they were never going to strike at the beginning of the year anyway).

At the same time, there are significant concerns with the bill. Students are worried that imposing such a contract on teachers, while preventing a strike, may cause a work-to-rule campaign: this is when displeased workers do only what is minimally required by their contracts.

In essence, it would mean the end of extra-curricular activities and extra help sessions, all of which are carried out by teachers on a volunteer basis. As to whether or not teachers will actually do this, the head of the Ontario Secondary School Teachers Federation has stated that they will make their decisions individually. 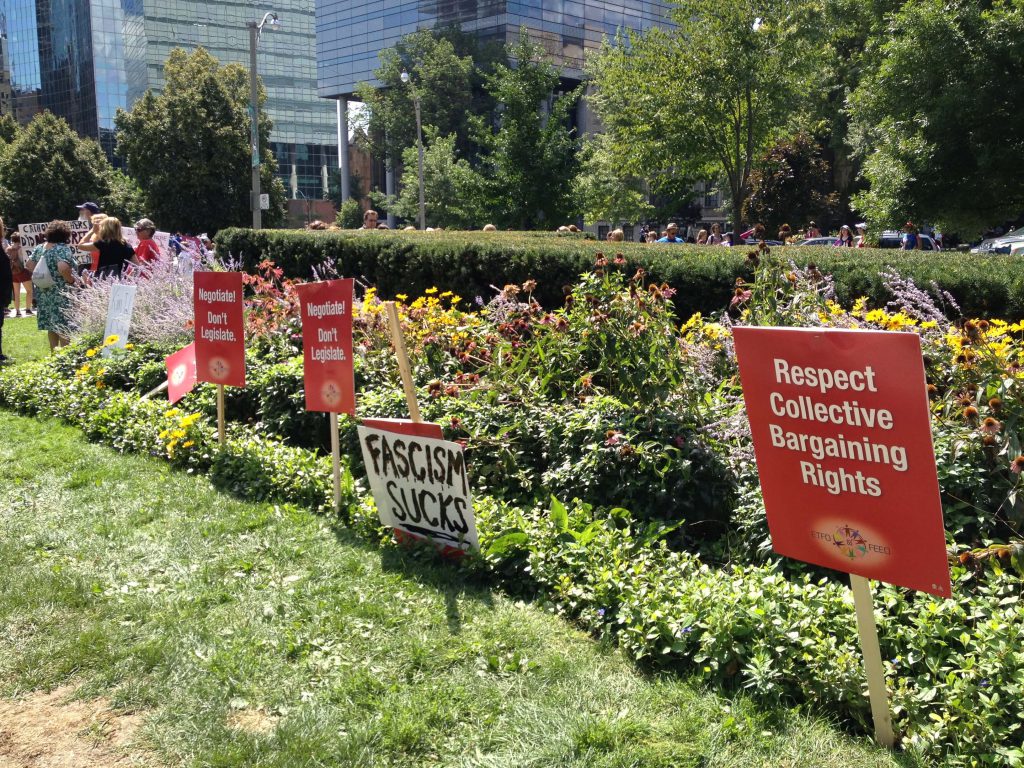 Several posters stuck into the ground in front of Queen’s Park.

The bill was introduced into legislature this past Monday, receiving mixed responses from the different political parties. The Progressive Conservatives are supportive of the bill, although they believe it isn’t tough enough on teachers. PC leader Tim Hudak has said that a few terms that the unions prefer, including giving teachers more say in diagnostics tests for special needs students, should be excluded. On the other hand, the NDP believes that the bill is too tough on teachers, and that they should be allowed to continue negotiations since they have vowed not to strike.

To demonstrate their opposition to the bill, thousands of teachers rallied yesterday at noon in Queen’s Park. Teachers listened to and cheered for speeches made by various speakers, and towards the end even sang in (attempted) unison that “We must stand and make them hear our voice, we won’t stop till it’s made right, for the union makes us strong!” The key points of the protest were protecting teachers’ (and all workers’) rights to collective bargaining, demanding respect from the government, and negotiating a contract instead of legislating it.

The Reckoner asked a few of the teachers why they think it is so important that the “Putting Students First” act isn’t passed. Here were their responses: 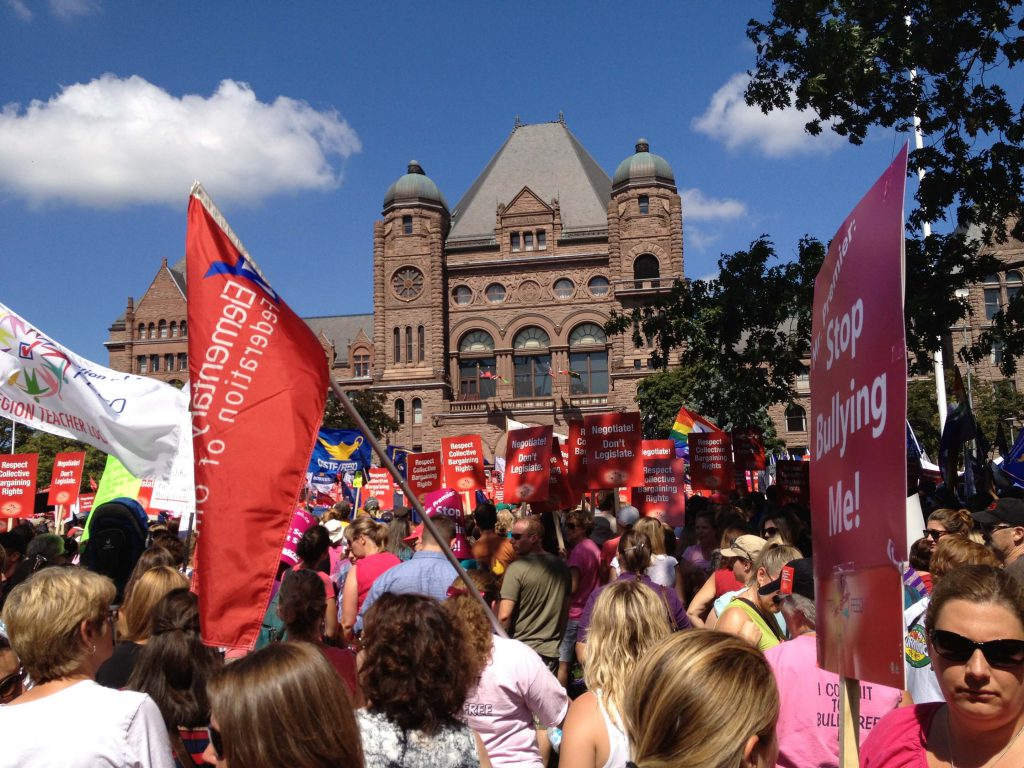 Thousands of teachers rally in front of Queen’s Park.

“Well, they’re taking away all right to negotiate and all power that anyone other than the government would have to actually put students first, and a lot of the motions in the act aren’t in students’ best interests. The government officials that are trying to pass the bill have never been in the classroom, don’t really see what’s important on a first-hand basis, and so it’s important for teachers to have their voice in order to keep students at the forefront.”

“First, it’s not really putting students first. Second, there are ways that we could’ve settled and made things better for students. They’ve decided not to negotiate with us, so they’re taking away all collective bargaining rights – they presented us with a deal and said, “Sign this.”. We came back with another offer but they aren’t willing discuss. How is that putting students first, when they’re angering the whole teaching profession?”

So what happens next? With the support of the Progressive Conservatives, the Liberals hope to pass the new legislative contract as early as tomorrow. However, teachers have vowed that they will continue to fight, including pursuing legal action. Stay tuned for the end of this battle, but rest assured that no matter what, teachers and students will be in class on September 4.

The Scientists of Tomorrow