There are some conversations that you will always remember – shifts in perspective or raging fights or confessions of love. For me the one that stands out most in my mind was none of these things. It was a quiet conversation in the bathroom of Jak Park.

There is a small town in the Northwest Territories called Inuvik. It’s a place filled with colourful houses, stray dogs, and cigarette butts. Ten-minutes away is Jak Territorial Park. The park is not a beautiful place; nothing to be painted. It’s surrounded by mountains, but they are small and dotted by trees, not towering or snowcapped. Its appeal is less in the scenery and more in the total isolation. It’s a satisfying place to be.

We had been on the river for a month at this point. There were ten of us, we’d paddled across the border from the Yukon. Now we were staying in a small campground for a couple of days, waiting for our flight out of Inuvik.

I found Jamie in the bathroom after dinner. I hadn’t been looking for her; I hadn’t even noticed she was missing. I was just looking to escape chores. It wasn’t my turn to wash dishes and I wasn’t planning to wash anything else either. I was stuck in my head. It was strange to be off of the river after so long.

She was standing on the bench beneath the window when I found her. Short in stature, Jamie had a smile too big for her face and fair hair too long for camping. She was on the balls of her feet clinging to the windowsill trying to look out. She heard me walk in and stumbled around on the bench to greet me.

I pulled myself up in between two sinks. There was a soap dispenser digging into my back, but I couldn’t see anywhere else to sit.

“Not yet.” I replied. “What are you doing here anyway?”

Jamie pointed past me to an outlet where the battery of her camera was charging.

“I’m not leaving that thing in here alone, are you crazy?”

She laughed and I had to as well. It was difficult not to laugh when this girl was laughing. And I knew exactly what she meant. We had been warned not to leave valuables unattended.

I told her I would wait with her and she smiled at me knowingly – nothing escaped this girl. We sat in silence for a few minutes. I’ve spent enough summers with Jamie to know that sometimes talking is unnecessary, but there was something pressing on my mind.

“Hey, James,” I called her several different nicknames on rotation, “Do you ever think about Henry?”

I knew Jamie liked this boy more than she was willing to admit. She got this look on her face when she talked about him; the same look she got when we snuck dried pears from the food barrels or lit a fire on the first match.

“Yeah, I do. You know it’s funny; he was the boy that I was never going to feel anything for. But he has this pet snake, and these purple shoes, and I just do. There’s something about him.”

“I hope he thinks about you too.”

Jamie had moved so that she was sprawled on the bench. She stared up at the ceiling while she spoke.

The light on her battery had turned green. We both saw it, but neither of us moved to get up.

Henry has since chosen the company of another. I’m sure that his new girl’s smile will never overflow the way that Jamie’s does, and I hope he realizes this one day and thinks of her. Everything we were scared of, we were for good reason. It’s scary here.

I go back to that moment in the bathroom a lot. When my fears are realized and I don’t know what else to do. I think about our conversation, two girls sitting in a bathroom in the middle of nowhere, surrounded by average trees and below average mountains.

“I think I would stay here too, Jamison.” 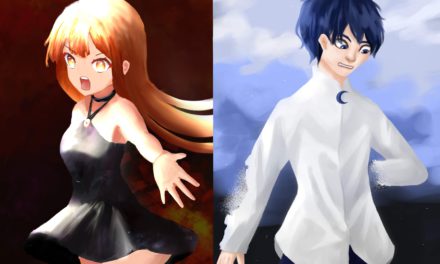