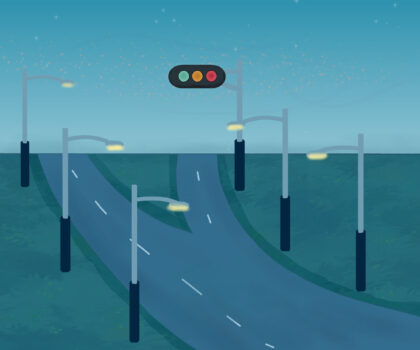 You probably don’t pay much attention to the ramps when you enter or exit a highway. The process is almost second nature to you—indicate (hopefully), watch out for other cars (hopefully), change lanes, turn, crank up or down the speed, and go. These mundane elements of traffic design, seen at every highway interchange from Windsor to Ottawa, are one of many scars left on the landscape by a deeply flawed design. This purportedly natural design neglects to take into consideration the safety of pedestrians, who are becoming increasingly important and numerous as populations grow.

A basic need of every resident is the ability to get around their community, so every road of a community must be safe for everyone to travel on. However, the slip lane, a stray lane intended for turning, stands in direct opposition to the idea of inclusive roads. Their selling point of enabling drivers to maintain speed while turning is dangerous as it runs the risk of cars coming close to pedestrians at high speeds. Familiar examples to the average Toronto commuter might include the off-ramps at the DVP/Lawrence Ave interchange or any on-ramp onto any 400-series highway with few exceptions.

It is long past due for them to be removed from city planning as they present a real danger to pedestrians and cyclists. Making Ontarian communities more walkable is imperative as the population of Ontario is projected to increase to 22 million within the next 25 years [1]. Having all these people drive every day will inevitably create more traffic on the road, which will exacerbate already ridiculously long travel times.

However, nearly four out of every five Canadians use a car to get to work [2], thanks in part to slip lanes turning highways into invisible curtains that cannot be crossed safely without a car. If Ontario wants to stay well-connected in 2046, it will need to start contemplating ways to encourage the people who can walk or bike to start doing so. Studies by the CDC have shown that people are more likely to walk or bike to get somewhere if the streets are safe enough to do so [3], but slip lanes are an active barrier to that, as they make the streets more dangerous to walk and bike on.

The biggest issue with slip lanes is that they create a separate conflict point between lateral traffic, turning traffic, and pedestrians. The separate lane creates a new flow of traffic onto the lateral road, turning one conflict point into two. Furthermore, the sharp angle of intersection between the turning lane and the lateral road creates a blind spot for the driver, which makes crossing the lane dangerous. A study of 195 traffic-pedestrian collisions found that 79% of cars involved in collisions at slip lanes collided with a pedestrian coming from the driver’s left [4].

To remedy this, the Federal Highway Administration has proposed reforms to the slip lane in an attempt to salvage a misguided design—this includes painting crosswalk indicators over the road [5] or making it subject to a traffic light [6]. They say the shallower angle will give drivers a clearer field of view and the traffic light will control pedestrian-traffic interactions. But at that point, wouldn’t the resources spent adjusting the slip lane be better used to create an actual intersection? An unseparated turning lane would satisfy their safety requirements much more than a slip lane at a shallower angle, since the unseparated turning lane intersects the lateral road at a right angle, which is the shallowest angle possible.

In fact, the entire concept of using a slip lane to allow traffic to turn faster is flawed. Any driver that has read the Transportation Ministry’s driver’s handbook should know that the faster a vehicle is moving, the longer its stopping distance is. If any consideration is to be given to pedestrians in this equation, then the goal should be to encourage turning vehicles to turn as slowly as possible. Slip lanes, by their very nature, make crossing the road more dangerous as drivers need to take longer to stop, which is the difference between avoiding and colliding with a pedestrian in a 3000-pound wheeled metal machine of death at 40 kilometers an hour.

Even at a highway on-ramp, where the intent is for the car to speed up as it merges onto the high-speed road, the slip lane has no place in a safe and inclusive transportation ecosystem. Having vehicles stop and turn onto the on-ramp as they would onto any other road instead of bearing onto them will allow for safer pedestrian crossing of highways while still allowing cars to accelerate to highway speeds in the merge lane at grade with the highway.

Thankfully, the City of Toronto is already planning to get rid of slip lanes in intersections with high foot traffic [7], but this is simply not enough. Other cities need to follow suit and put more measures in place to make streets a safe place for everyone, not just those who have the opportunity and capital to buy a car. While electric and self-driving cars may seem like a stopgap solution, those who travel on foot or by bike spend astronomically less on transportation expenses when compared to motorists.

As the world lumbers on in its state of perpetual inactive inertia, change must start simple. It must not only be simple, but effective as well. The elimination of slip lanes is the perfect first step to get the government’s foot in the door when it comes to sustainable and inclusive transportation and city planning. It is simple, effective, and will reduce costs and emissions. It simply involves the rejection of a flawed and dangerous design.

A member of the editorial board, he cannot bear to type his own name. Likely holds the opinion that the best immortality timeline exists in the "Arc of a Scythe" book series by Neal Shusterman and that luck is made, not had. He can be seen recreationally wearing a tie.

A Sizzling Start to High School at the Grade 9 Barbeque

Who Owns the News?