Innocence, Simplicity, and an Existential Crisis or Two

Life is not a treasure stashed away in a drawer: it’s the muddy bouncy ball you threw at your sister’s head when she stole your favourite swing. You, at age 4, missed, and when the ball landed into a nasty puddle, you didn’t just “move on” like an adult would. It was like life had collapsed upon you, because that one shot was your life. And then your eyes filled with tears when your mom said it’s time to leave because you just didn’t want to go home – it’s not that complicated – you wanted to dig the mud. Life was simple, and arguably stupid, but simple.

Somewhere along the lines, you grow up enough to not cry when it’s time to leave the playground. Mom is proud. You feel proud. Ten years later, you wish you could hold on to something the way you would do anything to stay at the playground.

“Take your time and treasure these years,” they say. But that’s what ruins the thrill of it. “These years” are the ones where you only care about what you want at the moment. You’re so intrigued by the world that you’re ready to take in all of it, and broken bones are healing wings but you cry about them anyways so that maybe you’ll be bought a cone of ice cream. You do what you do because you want to, and you’re the smartest you’ve ever been. You need to get taller, cooler, faster, beat everyone at Grounders and be the dodgeball champion because life is an adventure!

The world looks so tall from eyes just three feet above the ground. It’s a towering jungle wherever you go, an adventure to climb higher and higher, an end that seems so unattainable for the better – time just can’t go fast enough.

And it all goes wrong the moment you start cherishing life like it’s a treasure that must be concealed away with the utmost reverence, something you shouldn’t touch lest it shatters like a priceless glass, shards lying dull and dead. The moment you realize it’s all going to go away, you’ve already lost it all. It’s that incurable disease of existential dread that makes you stop in your jovial tracks and sink to the floor in agony.

Life is no longer an ephemeral moment to breathe, but a betrayal by everything you thought you trusted.

Don’t let them crush your hopes when they say life is short, that your school days are the best it’ll ever be, and that you should make sure time doesn’t pass too quickly. Who’s to say that life is a downhill battle? To be fair, I’ve hardly experienced anything. But I’ve experienced some things, and those things were enough to tell me that just watching the clock tick backwards is a headache.

In my severely unqualified opinion, dying with no regrets (and all of that emotionally mature garbage) is overrated. Because if I were to die with a desperation to survive for just one more minute, not out of fear but out of that deep-rooted love of being alive and smelling the air and holding a hand and seeing the sky – and even the less aesthetically pleasing scrolling through Shrek memes in the middle of class and chugging bubble tea and watching anime boys play volleyball at 5 am – that, however stupid it sounds, is what being alive would be like to me. 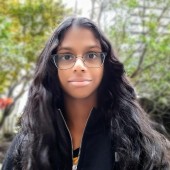 Akshaya Varakunan is a writer for the Life Board, despite the fact that she hardly has a life, and a member of the Illustrations Board, despite the fact that she can’t draw (just kidding). She has a passion for horrible humour, sleeping late, and playing Word Blitz in calculus class (also just kidding). In her free time, you’ll either find her sleeping or trying not to fall asleep—unless it’s 3 am, in which case she is wide awake and wasting time like she doesn’t have to wake up in 4 hours.