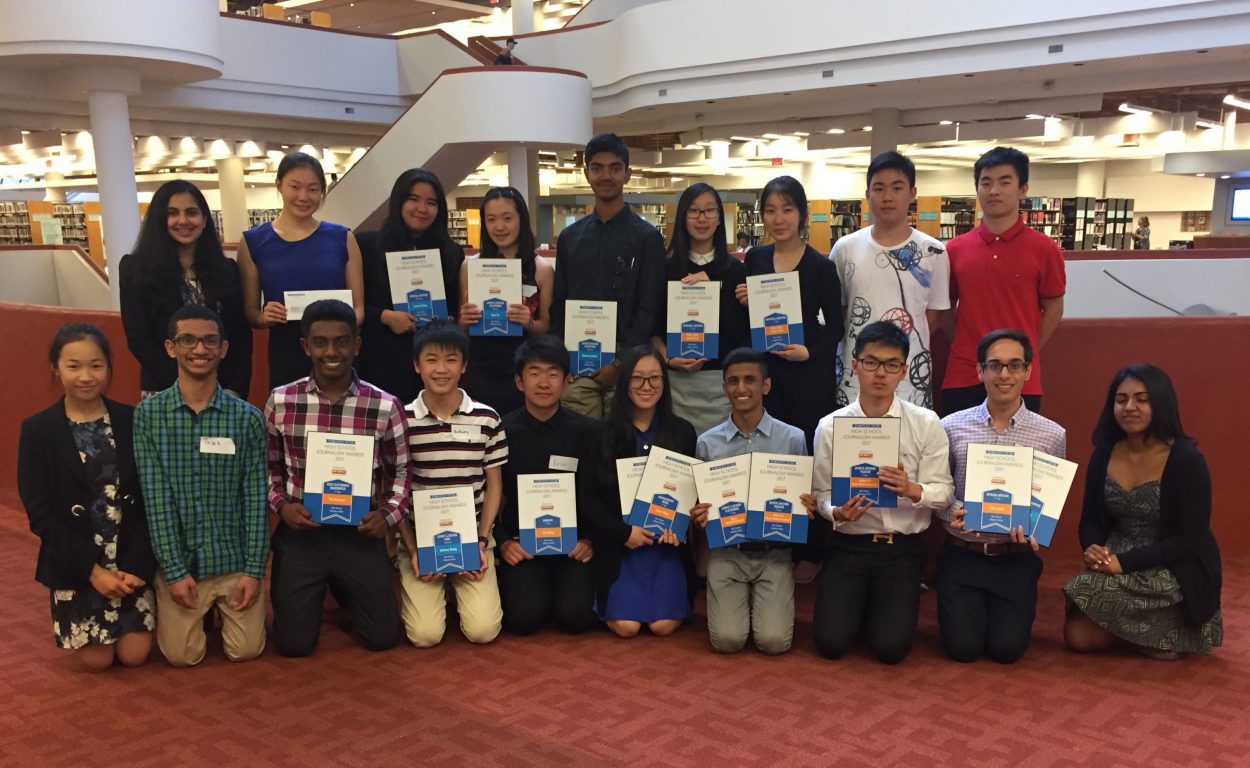 On 29 May 2017, the Toronto Star recognized the accomplishments of high school journalists at the High School Journalism Awards (HSJA’s). In addition to the title of Best Electronic Newspaper, The Reckoner received twelve other awards in various categories.

Formerly known as the Toronto Star High School Newspaper Awards, this year’s event was rebranded as the High School Journalism Awards, recognizing modern newspapers which publish through both electronic and print mediums.

Submissions for the HSJA’s were due on 26 April, with eligible content having to have been published either online or in print during the last year. There were twenty-one different categories spanning the various aspects of journalism including as reporting, photography, and content presentation.

The Star invited the winners to a celebratory luncheon at the Toronto Reference Library. The event was formerly hosted at the Toronto Star Vaughan Press Centre, which is now closed. Along with their sponsor Henry’s, the Star organized a photo booth and virtual reality station for the attendees.

After lunch, Jayme Poisson and Maria Vallis opened the awards ceremony. Ms. Poisson is an investigative writer with the Toronto Star, renowned for her work on the Rob Ford crack scandal and coverage of the 2011 Egyptian Revolution. Poisson, a returning HSJA speaker, spoke about her journalism career and interviewing strategies, saying, “It is my duty to give [a] voice to those who don’t have the power to speak out for themselves.” She was followed by Maria Vallis, Senior Editor of the Toronto Star, who presented the awards.

The Reckoner’s Outreach Manager, Joan-Shiao Chen, said she enjoyed herself but was disappointed there was a lot of time spent idle. “I think it was really cool, especially the virtual reality station and the food,” she said, “but I was hoping there would be more opportunities to take photos of the award recipients with the presenter.”

Vice-Principal Ms. O’Flynn-Wheeler accompanied the newspaper’s staff to the awards and was elated with The Reckoner’s performance, saying, “This is my first time here and I am so proud to see so many awards.”

Editor-in-Chief Parnika Godkhindi and her successor, Varun Venkataramanan, were interviewed by Hina Alam, a Toronto Star reporter. They were asked about their thoughts on The Reckoner’s annual success as well as where they hoped to take the paper in the future. Their interview was included in the Star’s feature on the award ceremony.

Reflecting on The Reckoner’s performance this year, Parnika said, “Our dedicated staff are never afraid to take risks. That is why The Reckoner is Ontario’s first student newspaper to have its own mobile application and highly interactive website.” She also said that Marc Garneau CI’s diverse student body inspires many articles, adding to the depth of the paper. In the future, Parnika said she would like to see more analytical pieces following in the style of the U.S. Presidential Election Breakdown.

The Reckoner would like to congratulate the following staff members for their individual achievements:

4 things matter most in Ruknoon’s life- Model UN, sleep, food and soccer (Arsenal and Toronto FC for life). A dedicated lover of hard rock and metal, he loves giving huge speeches about how great the genre is. He will watch any movie, TV show, read any book he finds as long as he finds it interesting for 5 minutes. He’s very shy of people but makes friends easily once he gets to know you. He has an unhealthy obsession with Russian Federation so don't go around speaking ill about Putin when he’s around unless you want to debate him.