Future’s new album HNDRXX dropped this year during late February, and Selfish is just one of the 17 songs featured in it. The song is slow and the background instrumental synths are laid back to allow for Future and Rihanna’s vocals to really shine. They both have similarly husky qualities to their voices that complement each other, and it’s pretty impressive that Future sings alongside Rihanna throughout most of the melody in the song. His low profile voice nicely interweaves with her relatively high-register one. And although Future keeps it light on the rapping, his signature steady rhythm and low-register voice make this song undeniably his.

If you’re looking to rewind to a chill beat and/or begin listening to Future’s new album, give this song a go.

This single was released in October of 2015. But it only recently blew up on Spotify which is long overdue seeing as how catchy the beat of this song is.

The lyrics are pretty ridiculous with lines referencing childhood cartoon and TV characters like “The weather cold, the weather so chill Chilly Willy penguin feather roll” and “Credit charge, Kermit the Frog, margaritas”. (The Kermit the Frog line is said to be referencing to the “That’s None of My Business” Kermit memes.)

In short, this song doesn’t take itself too seriously even though it’s a pretty great love-ish song about a flakey girl.

The background synths in this song are everything.

Nothing is abrasive, both the musical accompaniment and the artists’ voices are smooth on the ears. But don’t get great synth mixing confused with the idea of upbeat techno music.

The song is actually pretty heavy; the lyrics aren’t exactly a party. When asked in an interview what the lyrics meant, Teflon explained that “staring at Beretta Lake” is a metaphor for staring at the end. “The feeling of a lonely highway through the endless dark into the night.” [1]

Both Teflon Sega and SAINt JHN are up-and-coming, but watch out for them because if this song indicates anything, they’re on their way to becoming big.

Post Malone gets a lot of hate for being white. But regardless of the whole debacle on whether or not he’s appropriating grills and corn-rows, I’m really digging all of his work. And Congratulations is just one of the many great songs that he dropped recently in his new album, Stoney.

He brushes off the haters in this song, depicting and celebrating his success, crediting it to his hard work and dedication in the music industry. Singing in long-drawn notes, his drawl contrasts well with the up-tempo beat of the background music and Quavo’s rapping. He also doesn’t let us forget that he can rap, and does so seamlessly in between Quavo’s rap verses and his own singing throughout the song.

Am I being despicable or ignorant for genuinely liking Malone’s work? I don’t know, but you can ask Quavo for me.

Yes, you read that right. This song’s featuring Willow Smith – the ‘Whip My Hair’ one. Whether that makes you an automatic hater, put your feelings on hold and just give this song at least one listen. Kid Cudi serves with a breathy voice that’s even deeper than how he typically raps and it works amazingly in this song – especially when you have earphones on and the music chills kick in.

Willow holds her own as well, her voice overlaying his throughout the first melodic hook of the song. Similar to Future in Selfish, Cudi does quite a bit of singing even though Willow’s voice carries most of the melody. Notably, even his solo rapping verses and humming bridges are much more melodic than his traditional rapping beat.

Amy Chen is a senior Life writer and artist for the Reckoner. Her favourite colour is the sky, and she spells using OU instead of just the O because she was born a Canadian and not a monster. Every morning, she religiously pours frozen blueberries into her cereal, finding the slow process of the milk freezing over each individual blueberry endlessly satisfying. An unironic Kanye West fan, her current guilty pleasures include (but are not limited to) watching "The Best of Cardi B" compilation videos, biting into string cheese without stringing it, and following Cool 3D World's Facebook page.

Time By the Ocean

Crestfallen and In Love 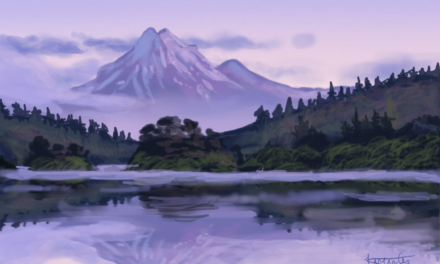