Bridging Towards a Safer Future

Being splashed by slush and rainwater. Squeezing through narrow walkways. Walking under dim, inconsistent lighting. These are only some of the problems that plague the thousands of students and residents who cross the Charles H. Hiscott Bridge—also known as the Overlea Bridge—every single day.

Originally constructed in 1960, the Overlea Bridge is located next to Marc Garneau Collegiate Institute and Valley Park Middle School. It is a central link between the communities of Flemingdon Park and Thorncliffe Park. 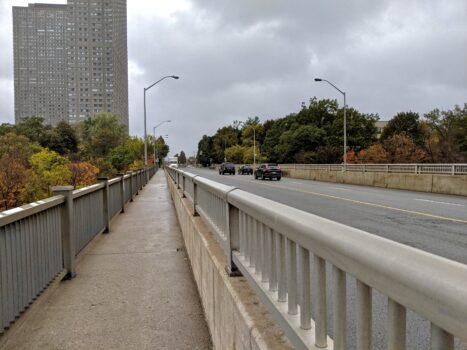 The Overlea Bridge Project began last November when Mr. Langford assigned the redesign of the bridge to his Grade 12 technological design course. On 29 January 2021, students from the class presented their designs to city councillors, MPP Kathleen Wynne, and MP Rob Oliphant. Barely two months later, MGCI students, staff, and parents presented their deputation to the City of Toronto’s Infrastructure and Environment Committee about Overlea’s inclusion in the ActiveTO initiative on 23 March.

“By far, my favourite part about the project is exactly the same thing I love about teaching:  working with the students,” Mr. Langford said, emphasizing the esprit de corps among the teachers and the students. “In fact, working on this project gives a similar satisfaction to the one a teacher gets by coaching an interscholastic team.”

Yolanda Zhou, a Grade 9 student, said that she especially enjoyed helping make posters and buttons, 110 of which were distributed to teachers. Through the project, she wanted to “help our community and reduce the amount of time it takes for [students] to get to school.” Yolanda said she would like more pedestrian space, a bike lane, and less traffic.

Similar concerns—overcrowding, lack of bike lanes, dim lighting, poor drainage systems—were raised by other students and residents, as described on the Overlea Bridge Project’s social media pages (IG: @overleabridge, Twitter: @BridgeOverlea). This issue has been a major complaint of parents in the school community for more than a decade. The members of the initiative have organized a writing contest as well as a survey, created by Ms. Roberge, which asks about participants’ experiences with the bridge. This fall, the team began the Overlea Bridge Design Contest (https://bit.ly/3oYa4gj) in which students will compete within their own grade level to create an economical and structurally sound bridge. In each grade, the first place winner will receive a $50 gift card and the second place winner will receive a $25 gift card.

In addition to staff support, students partnered with Diamond Schmitt Architects, an architecture firm, to design a logo for the campaign, and the company has completed designs of baluster extensions for the Overlea Bridge to prevent accidental falls. A Construction Notice was distributed to all households in the surrounding area indicating that the modifications will be installed by Toronto Transportation Services beginning this month.

When asked about his involvement with the project after his Grade 12 design class, Mr. Langford attributed much of the campaign’s continued growth and momentum to Ms. Cordova, one of the TOPS curriculum leaders, who arrived at MGCI last year.

“I was inspired after I saw Mr. Langford’s presentation with technology students regarding the safety of the bridge,” she stated. “I’ve had a lot of experience working with underserved communities throughout my career, so I thought I could help support this cause and help support the campaign process.”

The next steps for the project include an upcoming stakeholder session—the second phase—which will lead up to a public consultation session to raise awareness as well as a town hall to allow student voices to be heard. Students from various schools will be invited to discuss concerns about the renovation of the Overlea Bridge and the surrounding environment with city planners and politicians from various levels of government.

“I was inspired by the people around me. I draw inspiration as well from my colleagues who form the Equity and Social Justice Committee here at the school. Working with them helped me realize that decent infrastructure is an equity issue,” said Mr. Langford. “It is very important that every student in this school, and their families, are convinced that they have a voice, and that they can use that voice to help improve their community.”

For more information on the Overlea Bridge Project, check out @overleabridge on Instagram and @BridgeOverlea on Twitter. To contact Mr. Langford or Ms. Cordova, email [email protected] or [email protected]. If you would like to get involved, visit the greenhouse at lunch on Wednesdays to discuss plans for future projects.

Rena is a grade 12 student at MGCI and a senior news writer for The Reckoner. Her hobbies include vibing to music, sleeping (read: not getting enough sleep), reading, playing games, and procrastinating. You can probably find her suffering from math, physics, or chemistry on a regular basis.

Pledging For a Better Tomorrow: The White Ribbon Campaign