Both runs of the Women’s Slalom Alpine Skiing were held in the Yongpyong Alpine Centre on 16 February. The times from both runs were combined to determine the medalists of the event. Mikaela Shiffrin (USA), the gold medalist in the Giant Slalom event and the defending champion of the Slalom event from Sochi 2014, missed the podium this year and finished in fourth place. The medalists are as follows:

The Men’s Super-G Alpine Skiing was held at the Jeongseon Alpine Centre. Matthias Mayer of Austria, who won first place in the Slalom event in 2014, brought home the gold medal. This ends Norway’s 16-year gold medal streak in the Super-G event. The following are the medalists in the event:

Image (top): Frida Hansdotter of Sweden competing in the Women’s Slalom Alpine Skiing. She would go on to win the gold. (Image courtesy of PyeongChang 2018) 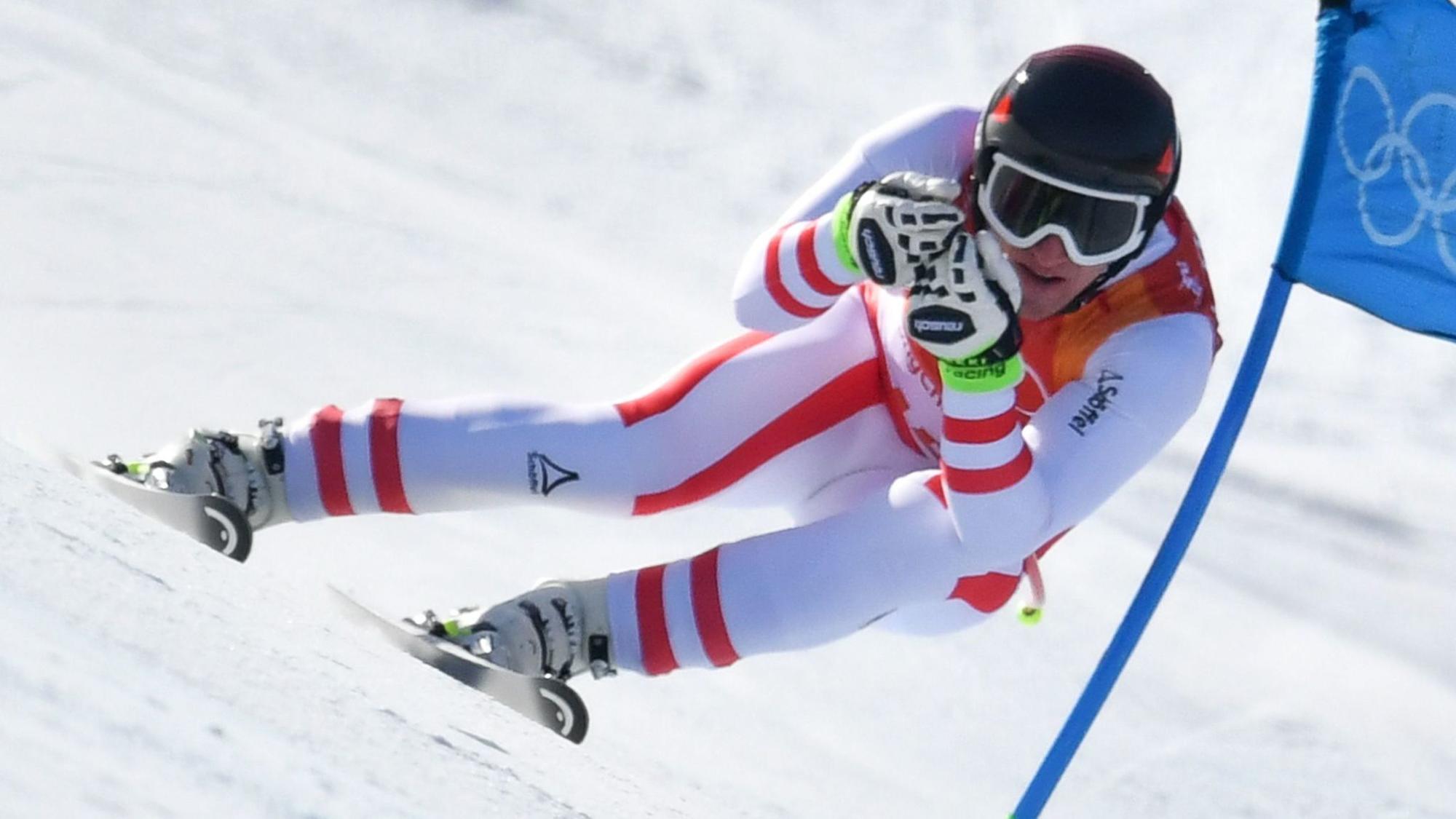 The Men’s 15km Free Cross-Country Skiing event was held in the Alpensia Cross-Country Centre. Dario Cologna picked up his fourth Olympic gold medal, his second in this event. The medalists are:

The fourth and fifth sessions of the Men’s Curling Round Robin were held on 16 February in the Gangneung Curling Centre. After these two sessions, Canada and Sweden are in first place, having won all four of their games. There is a three-way tie for third, between Great Britain, Italy, Switzerland, and USA, all of whom have won two of their four games. The remaining seven sessions of the round robins will continue until 21 February, and will determine the qualifiers for the semi-final matches, which will be held on 22 February.

The fourth session of the Women’s Curling Round Robin was also held on 16 February. The session ended with Japan and Sweden in first place, having lost no games, and Great Britain and South Korea tied for second with two wins each. Canada sits in last place, having lost all three of its games. The remaining sessions of the round robins will continue until 21 February to determine the teams that will move on to the semi-finals.

Image (top): Niklas Edin of Sweden throws a stone against the US which would later lead to a win. (Image courtesy of Getty Images)

Image (bottom): Canada loses against Denmark in an 8-9 game, adding to the team’s 3-game losing streak. (Image courtesy of CBC) 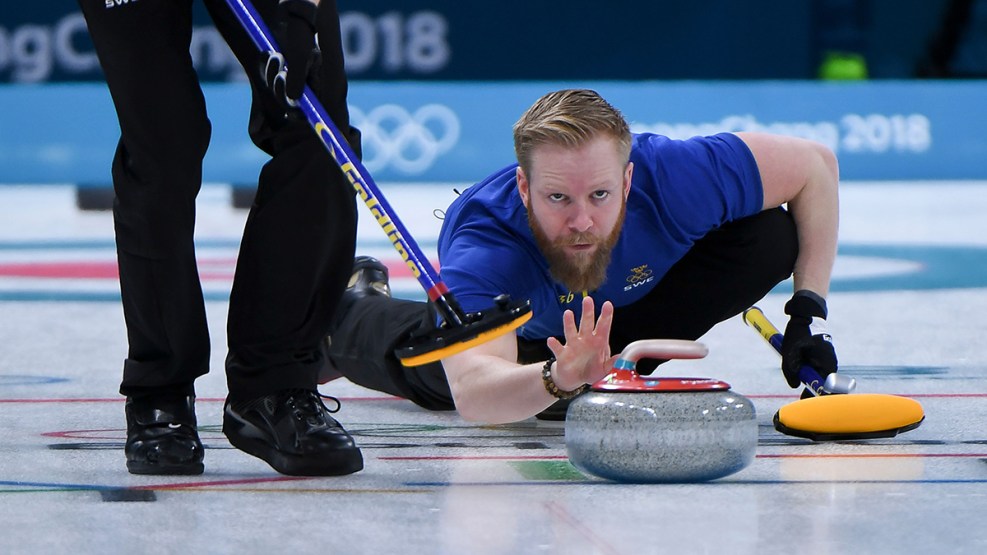 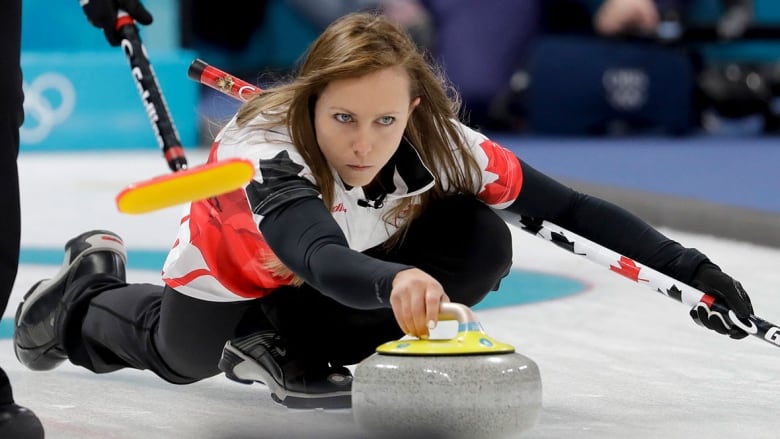 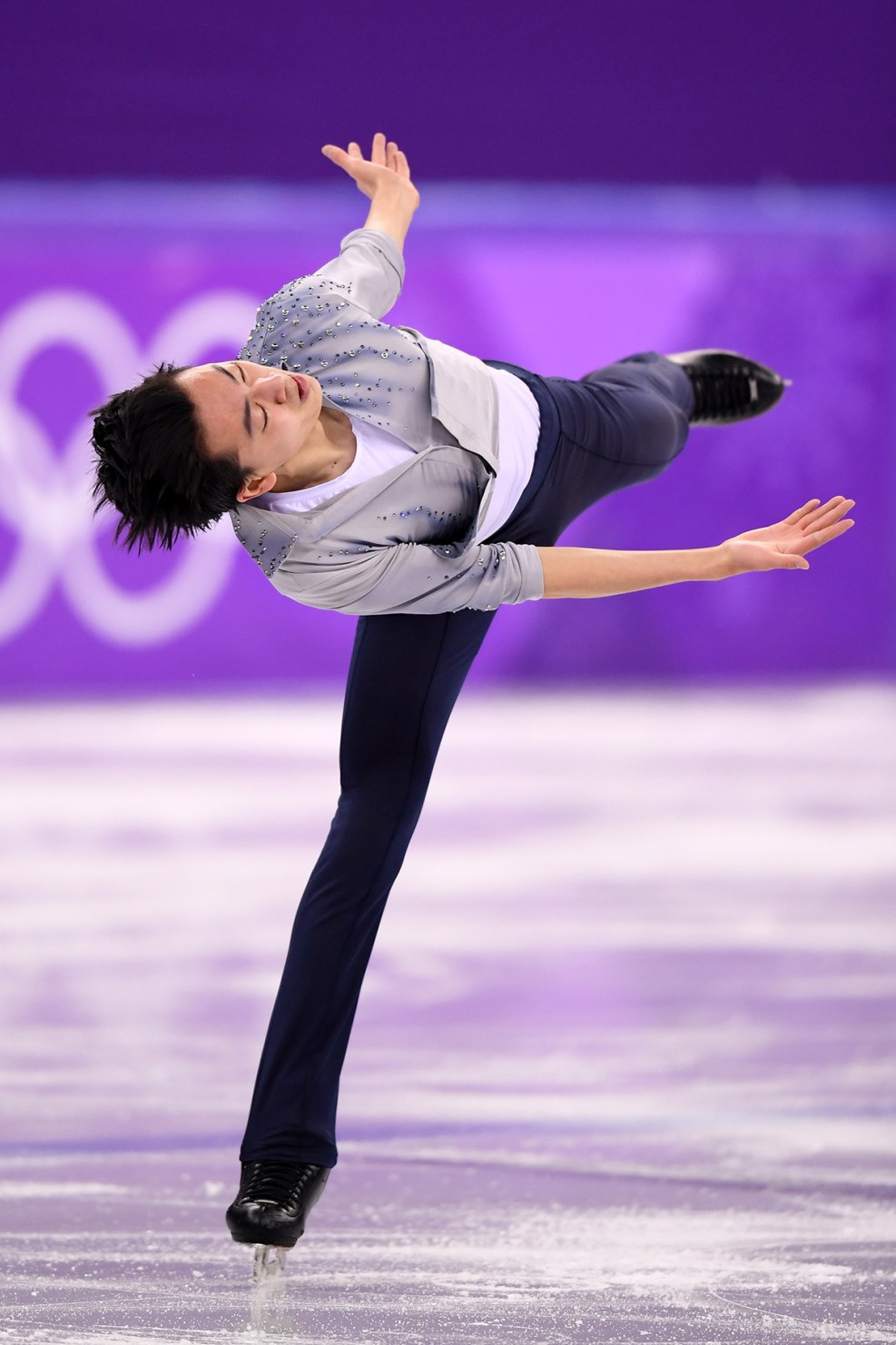 The Short Program of the Men’s Single Skating event was held in the Gangneung Ice Arena. The score received in the Short Program will be combined with the points received in Free Skating, which will be held on 17 February, to determine the medalists for the event. Currently, Yuzuru Hanyu (Japan) leads, followed by Javier Fernandez (Spain) and Shoma Uno (Japan). Hanyu, who is the defending men’s gold medalist, broke the Olympic short program record with 111.68 points, which falls only 1.04 points short from his world record. Seventeen-year-old Vincent Zhou from the USA became the first figure skater to land a quadruple lutz in the men’s short program at the Olympics.

Image: Vincent Zhou of the US, only seventeen, lands a quadruple lutz, being the first figure skater to do so in the Men’s Short Program at the Olympics. (Image courtesy of Getty Images)

The final round of the Women’s Aerials in Freestyle Skiing was held in Phoenix Park. After three rounds of jumps in the finals, the following athletes received medals in the event: 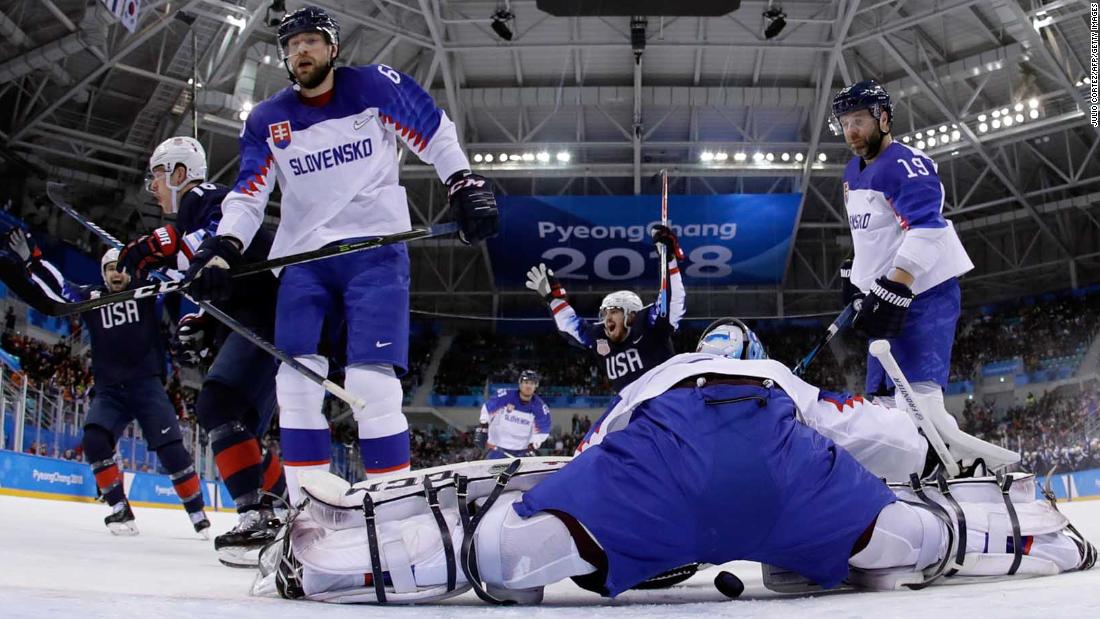 The Men’s Ice Hockey Preliminary Round for Group B continued from 14 February at the Gangneung Hockey Centre. The US defeated Slovakia 2-1 for their first win, while the OAR won over Slovenia with a one-sided 8-2 victory. Group C also continued their games from 15 February with Finland beating Norway 5-1 at the Gangneung Hockey Centre, and Sweden defeating Germany 1-0 at the Kwandong Hockey Centre. The preliminary round will continue for Group A on 17 February, determining the teams that will qualify for the play-offs, which will be held on 20 February.

Image: Ryan Donato of the US (back center) celebrates after scoring one of his 2 goals against Ján Laco of Slovakia, ultimately bringing the US to a 2-1 victory. (Image courtesy of CNN)

The first two heats of Women’s Skeleton were also held at the Olympic Sliding Centre. After these two heats, Jacqueline Loelling from Germany holds first place, while Janine Flock from Austria and Lizzy Yarnold from Great Britain are in second and third place respectively. The final two heats of the event will be held on 17 February.

The third and fourth heats of Men’s Skeleton were held at the Olympic Sliding Centre. South Korea’s Yun Sungbin won the host country’s second gold medal. The medalists in this event are as follows:

The qualification round for the Men’s Large Hill Individual event in Ski Jumping was held in Alpensia Ski Jumping Centre. Fifty of the fifty-seven athletes qualified for the two competition rounds, both of which will be held on 17 February. In the qualification round, Robert Johansson of Norway placed first, followed by Johann Andre Forfang of Norway and Ryoyu Kobayashi of Japan.

Image: Ryoyu Kobayashi of Japan prepares to take off during the qualification round of the Men’s Large Hill Individual event in Ski Jumping. He would finish third at the end. (Image courtesy of Kentucky New Era)

The qualification runs, quarterfinals, semifinals, small final, and big final of the Women’s Snowboard Cross were held on 16 February at Phoenix Park. The top three competitors from each of the semifinals proceeded to the big final, while the fourth to sixth competitors proceeded to the small final. Eva Samkova (Czech Republic) was just able to obtain the bronze medal, beating Lindsey Jacobellis by a mere 0.03 seconds. At the end of the big final, the following athletes received medals: 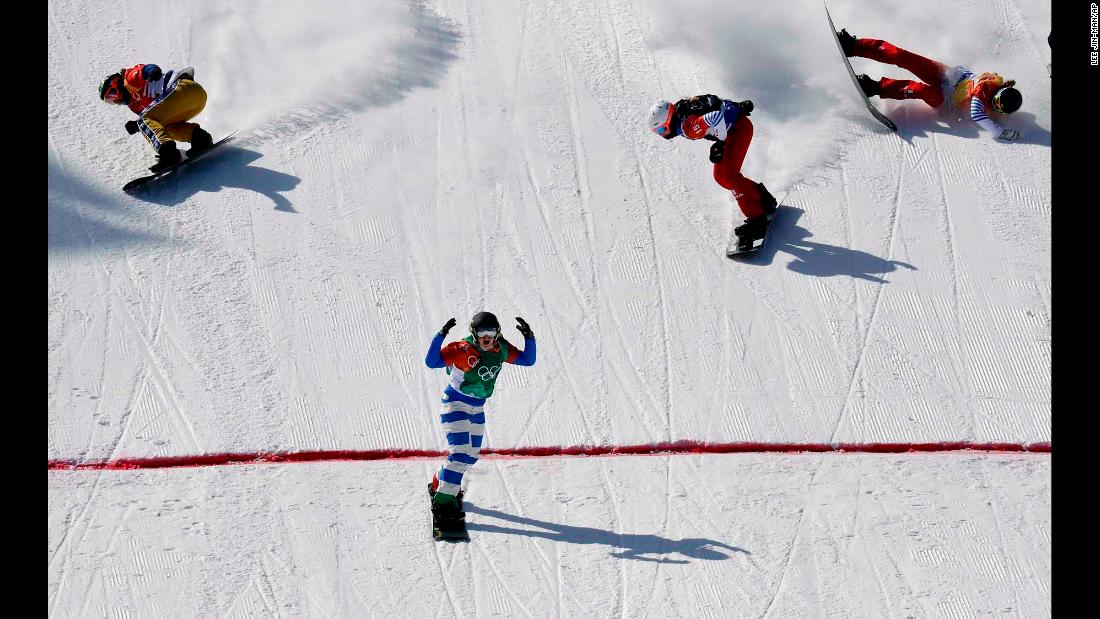 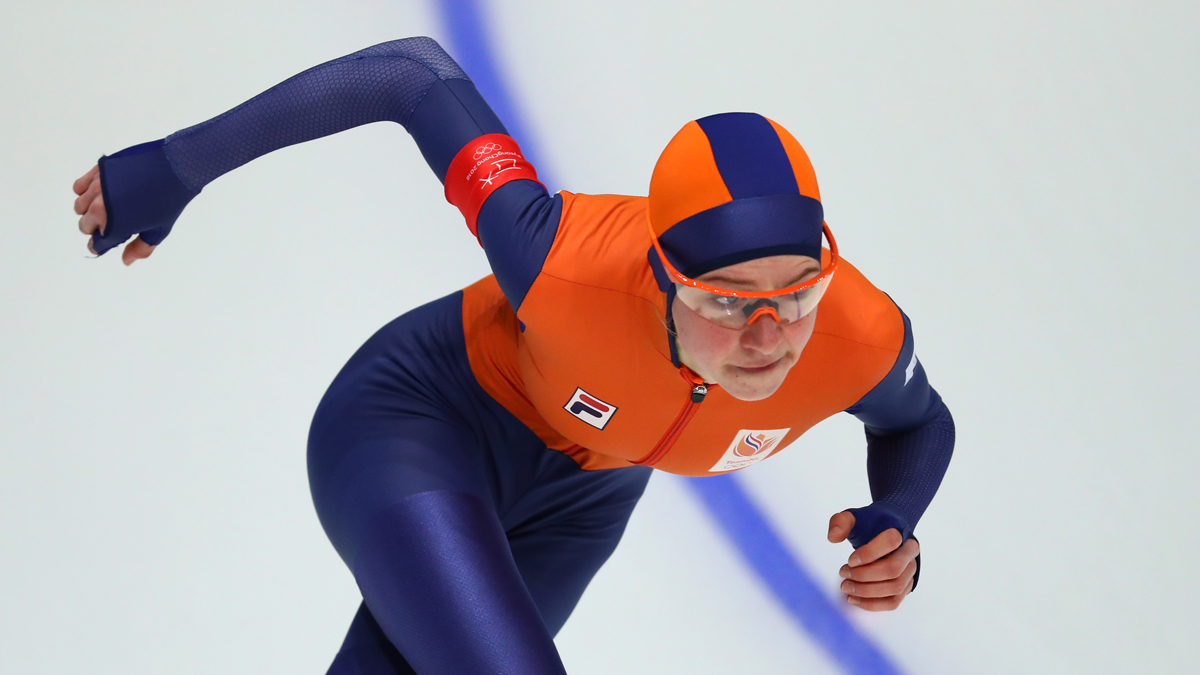 The Women’s 5000m in Speed Skating was held at the Gangneung Oval. A Dutch athlete again captured the gold medal to further the Netherlands domination in Speed Skating. The athletes who were awarded medals are:

Image: Esmee Visser of the Netherlands competing in the Women’s Speed Skating 5000m where she would go on to win gold. (Image courtesy of Getty Images)